Why We Should NOT TAKE DRUGS: Idiosyncratic and Paradoxical Reactions To Drugs

Here on the Olympic Peninsula, we woke up to a winter wonderland!! It does not happen here very often, so it is a treat, especially a few days before Christmas. I think we can be assured of a White Christmas now!!! It is still snowing as I write, so I do not know how much we will get but we have a good two inches right now.


Yesterday, after my really good day on Wednesday, I had a bad afternoon and evening. Calvin made us a pot of beef vegetable soup!! Over the past five years, he has learned to cook as I have given him directions from my recliner. He has now graduated to creating his own dishes and even bakes cookies for us (sugar-free and gluten-free).


He keeps busy during the winter months with his own writing (about ready to publish his new book) and working on the finish work of our renovated home. He has done a beautiful job. We are very comfortable.


Today I will write about the strange effects resulting from medications to people with various forms of Periodic Paralysis. 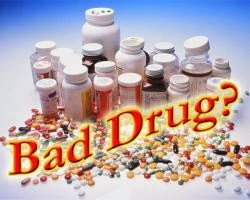 The two most common issues with drugs or pharmaceuticals for individuals with Periodic Paralysis (and others) are a paradoxical reaction and an idiosyncratic reaction. These are both serious effects. If one has a paradoxical reaction to a medication it means that the opposite of what is supposed to happen will occur. For instance, if someone takes a sleeping pill and then stays awake all night, it is known as a paradoxical effect. This can be just an inconvenience or very serious depending on the medical issue and the reaction. If someone who is already experiencing high blood pressure, is prescribed a drug to lower blood pressure, but it increases the blood pressure, this can cause a stroke, other serious effects or even death.


If an individual develops tremors, metabolic acidosis and paralysis from taking an antibiotic; these would be considered as idiosyncratic effects; reactions or side effects, which would be totally unpredicted, unexpected and never seen before. These effects would not be listed as possible rare side effects. This is a serious problem because these idiosyncratic effects, also known as “type B reaction” can be harmful by causing damage or even death. The amount ingested has no bearing on it. The reactions may occur from the smallest amount possible after one dose and the reactions may occur right away or after a little passage of time, even after a few weeks or chronically after a period of time.


It is believed that the type B reaction is an immune-mediated toxicity. This means an idiosyncratic reaction is an immune system response, which causes the drug to be toxic or poisonous to the individual who ingested it, inhaled it or absorbed it through the skin and causes cellular damage. Experience and research indicate that very few treatments exist. One must stop taking the drug, repair the damage if possible and provide life support if needed.


It should be noted that there may be no reaction the first time but may happen after the second time it is prescribed or at any time, even if taken for many years with no problems. The unexpected reaction may also occur after discontinuing the drug many weeks previously. The reaction or side effect may not be the same each time the drug is introduced.


Research indicates idiosyncratic effects are related to metabolic, mitochondrial and inflammatory dysfunction rather than the immune system and that there might be a genetic link in many cases.


Many individuals with Periodic Paralysis have serious side effects from the drugs they are prescribed. Without knowing this and without a diagnosis, doctors will prescribe drugs to treat symptoms that appear to be neurological or for other issues. The patient will use the pharmaceuticals and develop new symptoms, over time. These symptoms begin to look like something else for which new medications are prescribed, and the cycle continues. Or if there is no diagnosis and a person is suspected of having a conversion disorder, once everything else is ruled out, psychotropic medications may be prescribed. These medications can become out of control and it is not uncommon to be on 5 or 10 or more drugs at one time. They are toxic to the body and are causing damage. Most of them are also triggers for the periods of paralysis, and each paralytic episode causes more damage to the body.
I am a victim of this cycle. I was misdiagnosed several times, given medications for which created new symptoms for which more drugs were prescribed. I was experiencing ataxia, dyskenesia, tremors, heart issues, blood pressure issues, anxiety, pain, passing out, muscle weakness and more and of course episodes of partial and full-body paralysis. At one point I was on 15 different drugs, of which I actually needed not one of them.


I finally had a huge seizure or stroke-like episode. I ended up in the hospital. I was given more medications causing hallucinations, among other things, and which left me in and out of consciousness. I was permanently left with muscle weakness, breathing issues and exercise intolerance. I could not take care of my own personal needs like toileting, bathing, dressing or eating. It took many months to be able to have strength enough to stand by myself and I had to learn to walk again with the aid of a walker and physical therapy. I have never recovered to the point I was before that episode. I now use a power wheelchair for any more than a few steps, am on oxygen therapy 24 hours a day, must refrain from any exercise or exertion, am stuck in a recliner all day and much more.


With a proper diagnosis and without all of the unnecessary drugs, which caused paradoxical and idiosyncratic reactions, I would be much better in all ways. The following is a partial list of some of the drugs I took and some of the obvious effects of each.

(This does not include all of the drugs that cause long QT heartbeat
and any or all of them trigger episodes of full-body paralysis.)
In conclusion, a paradoxical or idiosyncratic reaction is an immune system response to drugs due to genetic predisposition and metabolic dysfunction in individuals with Periodic Paralysis, a mineral metabolic disorder. This includes the medications specifically prescribed to treat Periodic Paralysis ( Acetazolamide/Diamox/Keveyis).
Precautions must be taken to avoid these effects. Stop the drugs (with the help of a doctor, very carefully) or do not start them at all. There are natural ways to control many of the symptoms of Periodic Paralysis, namely avoiding triggers and other common sense and natural methods.

Added 9-24-2020:
What are the Periodic Paralysis Triggers? AVOID AT ALL COST
https://periodicparalysisnetworkinc.com/wp-content/uploads/2020/08/What-Are-The-Periodic-Paralysis-Triggers-AVOID-AT-ALL-COST.pdf
Until later…

Posted by Susan Q.Knittle-Hunter at 9:28 AM